The crew decided to see what weapons and armor they could find in the Splice before attempting to hunt down the marrowblight. Windows covered with mealy boards and one lopsided automatic door adorned the outside of the dingy one-story building beside the Ministry of Eternal Vigilance. Above the entrance was a hologram of a bizarre, ostentatious hat made entirely of tiny bones and the words “Bonesmith’s Boutique: Merchandise You Can Trust!” According to the infosphere, this rather disreputable business sold a motley assortment of weapons, armor, and sundry supplies.

The boutique was named for its proprietor and sole employee, Bonesmith Jaklyn. She was behind the front desk wearing an elaborate pirate-styled outfit and the same strange hat depicted on the sign outside. When the bone trooper saw the crew, she opened her mouth wide – the skeletal equivalent of a smile – revealing several golden teeth. “Ah, breathers!” Jaklyn exclaimed, using a common Eoxian term for living individuals. “Welcome to Bonesmith Jaklyn’s boutique! We’ve got everything your little beating hearts might desire – and probably more!”

She actually had every item the crew requested in stock, although she initially asked for twenty percent more than they would have expected to pay. Kima engaged the Eoxian shopkeeper in conversation, discussing bringing in steady business, and even offering to do a feature of the shop on his vid show. Jaklyn warmed to the lashunta’s sales pitch, and not only did she do away with the upcharge, she offered him and the crew a storewide discount! Once they had completed purchases and outfitted themselves, they headed back into the streets of Orphys. 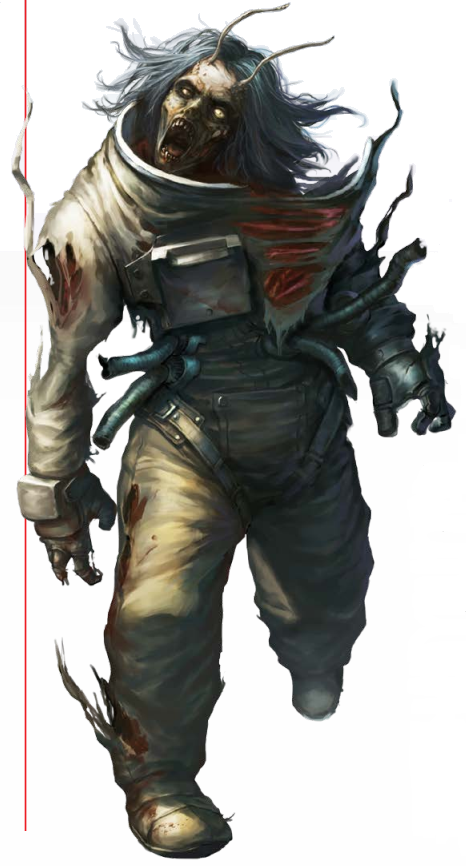 Kusanagi sensed right away that something was wrong, and a moment later a pair of nihili dropped from the walls flanking the doors to Bonesmith’s Boutique. The android threw himself forward into a roll and crossed the street, pulling a pistol as he went. Seeing this, the others likewise reached for weapons. Glitch joined the operative across the street and lashed out with magic. Galakrond could feel the undead creatures’ gravity aura crushing his lungs, but he and Kima stood their ground and shortly the undead fell to the street. The crew found a pair of credsticks containing thousands of credits and quickly surmised that the nihilis had been hired to attack them. Clearly, they had drawn someone’s attention.

A couple of hours after they left the safety of Orphys’ atmosphere dome, the blasted landscape of the wholly devastated and undead planet gave way slightly to a carefully cultivated area surrounding a dilapidated hut. The displays were almost garden-like in their precise arrangement – thin, pliable bones weaved intricate patterns in clumps that might otherwise be living bushes, and flutes of skin and cartilage might have been mistaken for flowers were it not for the disturbing shapes and absence of brilliant colors. Beyond the “garden” sat a bizarre, circular hovel apparently made from stretched, cured skin wrapped around a frame of massive bones. A front door hewn from sickly wood stood ever so slightly open.

The crew circumvented the worst of the “bushes” in their approach to the door, but as soon as they stepped into the open yard, a fleshy mass they had mistaken for the ground jerked into motion! Massive horns atop the ellicoth’s head gored Galakrond before the crew could react. Worse, when the vesk soldier advanced, his armor’s Geiger counter spiked and he practically choked on the radiation emanating from the gargantuan alien. 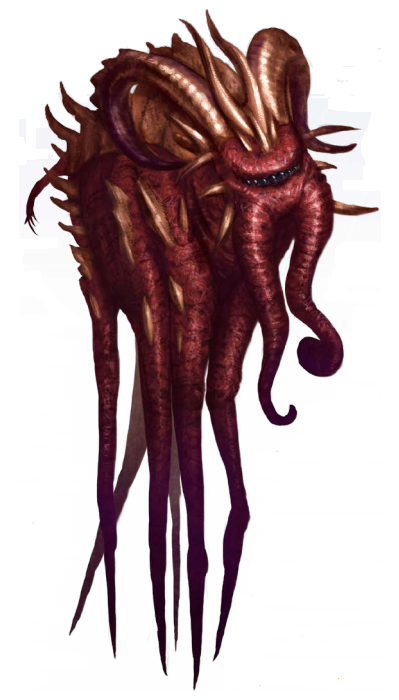 The Starfinders began their assault, Glitch and Kusanagi keeping their distance while Kima joined Galakrond in melee against the great beast. The vesk was struck by the ellicoth’s trunks and the alien seemed to siphon his life to heal its own injuries. Between the radiation and the ability to recover from wounds, the crew got a little nervous, especially after it rampaged to gore both of the melee combatants at once. In the end, however, the Starfinders attack overwhelmed the ellicoth, which fell heavily to the ruined ground. The crew retreated to catch their breath and drink serums of healing to recover from the effort of felling the enormous guardian.

Rather than close with the radioactive corpse, the Starfinders went around the side of the flesh-draped hut and made their own entrance! Within, the shack was threadbare and devoid of any items of obvious value. Dusty and brittle furniture littered the floor, and the marrowblight attacked from behind this meager cover! 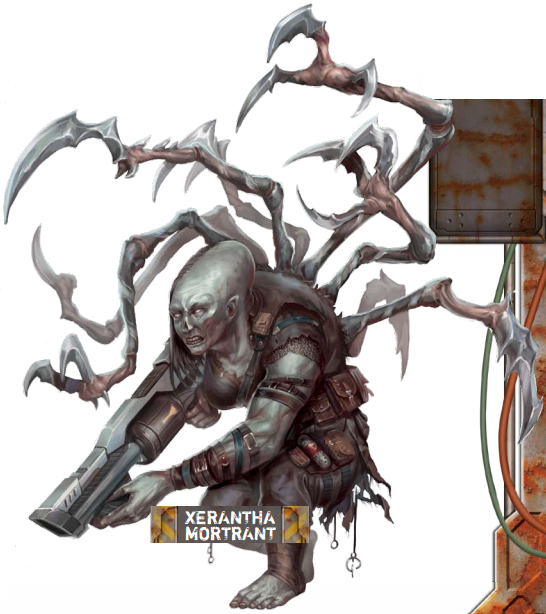 Galakrond closed and came under attack from the marrowblight’s claws and spurs. He weathered the onslaught, and shortly, the crew’s overwhelming counterattack set the undead creature back on her heels. They demanded her surrender, and she tossed her weapon to the floor, raising her hands above her head.

The marrowblight, Xerantha Mortrant by name, confessed that she had been colluding with the Corpse Fleet for a long time. She admitted to meeting with Captain Zeera Vesh, who was on the planet recruiting for some massive push out to some undisclosed location in the Vast. Xerantha denied sending the nihili assassins after the Starfinders, suggesting that might have been Vesh’s move. She added that they could find her in a canyon nearby known as Skullcap Gorge. When she described the place, they realized that they had passed it on the way out to the marrowblight’s hut. They left Xerantha in her hut and headed out to confront the Corpse Fleet captain.

The desolate Eoxian terrain turned macabre as the sloping land descended into a gaping canyon that stretched for dozens of yards. But instead of sheer cliffs of rock, towering piles of bones and skulls of all sizes and shapes formed the walls of the gorge. At the ravine’s eastern end, a wide pool of bubbling green acid abutted a sheer cliff. Several flat, stepped rocks next to the pool approximated a stairway climbing to the top of the cliff.

They entered the canyon from the west; the enormous walls of bone to the north and south were fifty to sixty feet high. When the crew was about halfway between the acid pool and the western edge of the gorge, a figure at the top of the “steps” stood and called out to them. “Petty, foolish, irritating Starfinders! All of the effort I spent to weave this deadly trap, and for what? To have you bumble through, unharmed and yet still so ignorant? Allow me to enlighten you. I am Captain Zeera Vesh, esteemed officer of the mighty Corpse Fleet – valiant navy of the true Eox – and you will go no farther. You’ve meddled enough in our plans. Now, I shall succeed where my lackeys have failed. I shall destroy you and bring glory to the Corpse Fleet once and for all!” 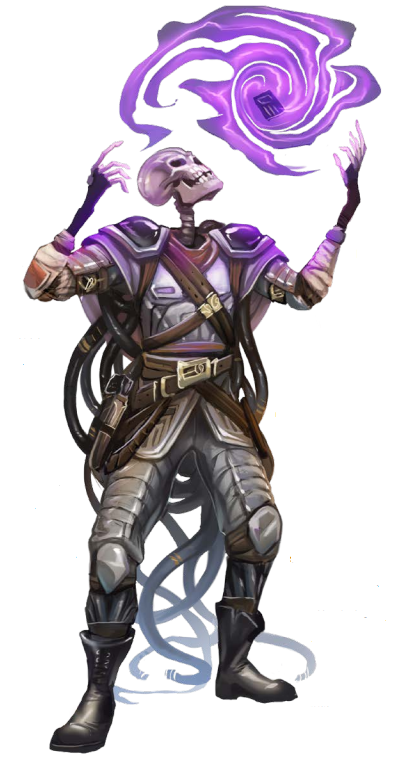 While her diatribe had distracted them, half a dozen bone troopers had closed the trap from the west, pinning the crew between them and their captain. Kusanagi engaged Vesh while the others set to work against the Corpse Fleet soldiers. Explosions from infused grenades, supercharged weapons, magic missiles, doshko and solarian blades, and plenty of blaster fire filled Skullcap Gorge with enough noise for two full battalions hard at work trying to kill each other.

The android quickly decided that he outmatched against the Corpse Fleet captain, who seemed to have had the same operative training as himself. He engaged his cloaking field and was dismayed that Vesh seemed to be able to see right through it! He retreated down the stairs toward his companions, and as the number of bone troopers dwindled, they moved to assist. In the end, Zeera Vesh faced off against Kima and was found lacking. Her body crumbled to dust and the crew wasted no time kicking the ashes into the nearby acid pool. They collected her belongings and the items of value carried by the bone troopers, then returned to Orphys and the Sunrise Maiden.

Captain Vesh was carrying a secure computer data module, and once Glitch ported it into the ship’s computer he was able to hack the system and access the information within. The module contained the data that was deleted from the datacore in the Star-Eater’s Spine, which revealed that the Cult of the Devourer left its Diaspora base to search for the Gate of Twelve Suns in a distant star system called Nejeor, based on the cultists’ interpretations of Nyara’s prophecies.

Nejeor’s coordinates put the system somewhere in the Vast, aligning with what Xerantha Mortrant had told them. The electronic signature on the data matched that of the hacker who had scrubbed the files from the cult’s computer system, confirming that the Corpse Fleet had visited the Star-Eater’s Spine, accessed the datacore, and learned that the cult was searching the Nejeor system for the “key” to the alien superweapon.

They sent transmissions to report their findings to the Ministry of Eternal Vigilance, the Eox veteran Gretal Rapinder, and also Chiskisk, back on Absalom Station. A few hours later, the shirren responded, thanking them for their efforts, letting them know that additional credits had been added to their accounts, and directing them to plot a course to Apostae. There they would find fellow Starfinders in need of rescue from a dark elf who had double-crossed the Society.

The drow hadn’t seen the Sunrise Maiden coming. Given Villyth Zeizerer’s recent defeat of a trio of Starfinders sent to retrieve some weapons she’d stolen, she had been overconfident when she demanded ransom from the Society. Unfortunately for her, she had captured some good friends of the crew. The Starfinder ship swiftly rendered the dark elf vessel inoperable, and they moved to board. 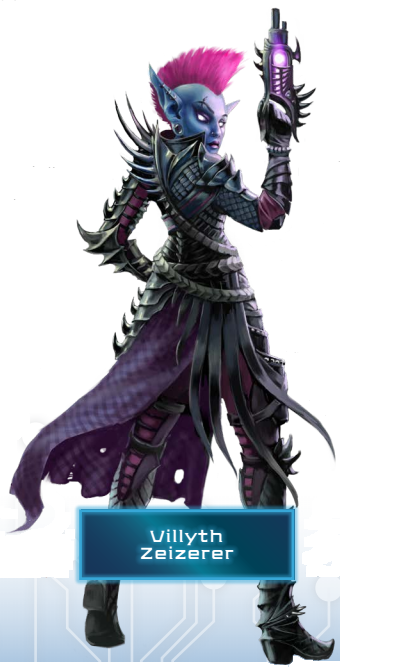 They found several half-orcs and dark elves waiting with weapons drawn when they breached the airlock, but a well-placed spell grenade by Glitch thinned the enemy numbers by half. Galakrond and Kima moved to engage the survivors while Kusanagi chased the leader and gave her a bleeding wound. Villyth quaffed a serum that rendered her invisible, and slipped past the crew and into the airlock between the ships. They gave chase, but she had locked them out of their own ship!

Then Winslow, warned of the invisible drow from the chatter over comms, rendered her unconscious with a simple mind thrust. The shirren gave his companions a thumbs up as he reopened the airlock, and they took Villyth prisoner. They found their fellow Starfinders locked in an upper chamber of the dark elf ship. Boske, Porunga, and Twitch were gratified to see their friends’ faces, and happily came back aboard the Sunrise Maiden.

Session 14 Pirates of the Diaspora