The tall and confident lashunta man gestures to several functional chairs, inviting you to sit. “Thank you for arriving so quickly. As I mentioned in my comm message, we have an urgent opportunity to recover some critical information.

Arvin informed the Crew about a Starfinder ship called the Unbounded Wayfarer lost on an exploration mission in the Vast several months before. He sent them to speak with the vesk Julzakama to retrieve Starfinder insignias that had come into the pawnbroker’s possession. The Crew brought Arvin the name and location of a Corpse Fleet ship called the Endless Threnody that might provide a clue to the missing Starfinders. He requisitioned a Pegasus-class Society ship called Loreseeker and took the Crew to seek out the Endless Threnody, marooned in the Drift. The Loreseeker was damaged in the fighting, but the Starfinders were victorious.

The crew brought Arvin information from the Endless Threnody’s navigational computer, which placed the Unbounded Wayfarer on the planet Ulmarid. He requisitioned a Drake-class Society ship called Odyssey and took the Crew to the planet. They returned with the bodies of the fallen Starfinders and the data they’d recovered before being shot down. Arvin helped the crew defeat the pirate ship Lawblight when it attacked after the Odyssey returned to Ulmarid’s orbit.

For their efforts, the venture-captain recommended the Crew be inducted as full members of the Starfinder Society. 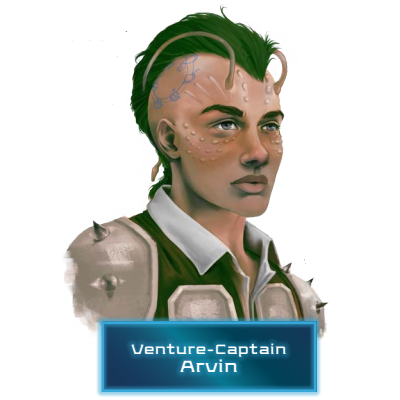