The third pillar of the Society’s leadership is Guidance, a network of uploaded personalities of exemplary Starfinders. Guidance functions in two major ways: it’s the first entity to formally induct new Starfnders into the organization, and every new Starfinder begins his or her careers by receiving a commencement address from Guidance. The uploaded bank of personalities also confirms the election of new First Seekers.

The crew met Guidance after their graduation into the Starfinder Society. It collected DNA samples from each of them, and offered a Starfinder implant. It provided some information about the Scoured Stars incident and their role as the next generation of Starfinder field agents. It then directed them to seek out each of the four Starfinder faction leaders and perform a small task for them.

After the crew completed requests from all four Starfinder faction leaders, Guidance summoned them back to the Lorespire Complex. It projected a different image than before – that of a korasha lashunta – and congratulated them on their success. It repeated the Society’s need for skilled agents and expressed high hopes for the crew’s potential as field agents. 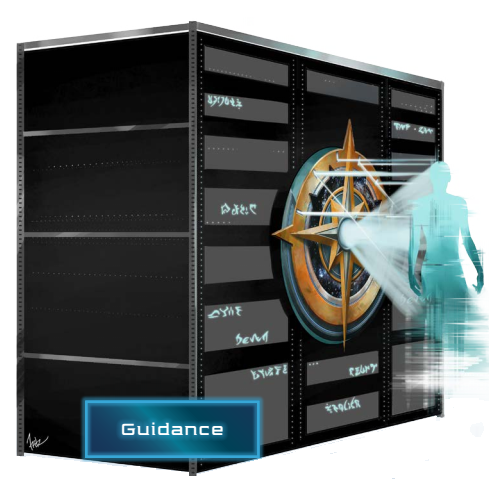