A massive vesk in a muscle shirt stands at the rear of the shop, behind a low desk and a series of heavy metal bars anchored into the ceiling. Julzakama is carelessly disassembling an old computer, but he looks up from his work when you enter his shop.

The Crew encountered this unusually arrogant vesk pawnbroker in the Downlow neighborhood of Absalom Station after he contacted the Starfinder Society offering to sell several Starfinder insignias. These insignias belonged to the lost crew of the Unbounded Wayfarer, which was lost several months before on an exploration mission to several planets in the Vast. After Boske casually threatened the loan shark, the man admitted that the seller had been an Eoxian called Exegara. Further, Julzakama informed the Crew that he had sent her to a nearby nursery called the Vat Garden to purchase clean skeletons.

After the raid on the Fusion Queen, Galakrond brought the Downside Kings’ looted weapons and armor to Julzakama’s shop. The vesk pawnbroker asked no questions about the bloodstained gear and happily bought the lot. 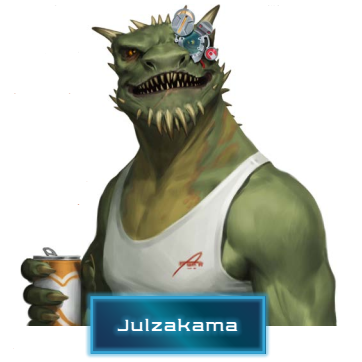