His Excellency Gevalarsk Nor serves as the Eoxian Ambassador to the Pact Worlds on Absalom Station. He had the elongated cranium marking him as an elebrian, a native of Eox. He was clearly undead – his skeletal countenance displayed no scrap of flesh, and an eerie light burned in his otherwise empty eye sockets.

The crew was invited to speak with the ambassador of Eox at their embassy in the Parkside neighborhood in the Eye of Absalom Station. He informed them that he had volunteered to serve as arbiter between Astral Extractions and the Hardscrabble Collective in their rights dispute over the Acreon and Drift Rock. He asked them to serve as an expeditionary force on his behalf to determine what had become of the Acreon’s crew and determine the true nature of the Drift Rock. Once they agreed, he also requested that they secure and return a parcel on the Acreon that was meant to be delivered to the Eoxian embassy. They agreed to take on the ambassador’s mission. 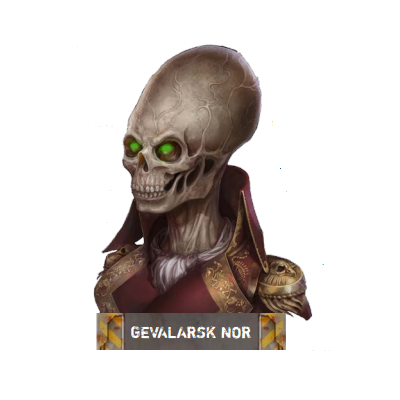