LEVEL 0 (AT WILL)
Detect Affliction: Determine whether a creature or object has been poisoned, is diseased, is cursed, or is suffering a similar affliction.
Detect Magic: Detect spells and magic items within 60 feet.
Fatigue (Touch attack; +7 to hit EAC; Fort Save – DC 14): Touched creature is fatigued.
Grave Words: Force a corpse to babble.
Stabilize: Cause a dying creature to stabilize.
Telekinetic Projectile: Telekinetically hurl an object, dealing 1d6 damage to the target and object.

AUGMENTATIONS
Starfinder implant (on right hand) – activate it as a swift action, and displays the Starfinder mark. Increases light level by 1 within 5 feet.

CLASS ABILITIES
SPELLS
You cast spells drawn from the mystic spell list (see page 336). To learn or cast a spell, you must have a Wisdom score equal to at least 10 + the spell’s level. The Difficulty Class for a saving throw against your spell is 10 + the spell’s level + your Wisdom modifier.

Every time you gain a level, you can swap out one spell you already know and learn a single new spell of the same level in its place.

You can also decipher magical inscriptions that would otherwise be unintelligible or, as a full action, identify any spells encoded in a spell gem as a full action. This does not normally invoke the magic contained within, although it may do so in the case of a cursed or trapped spell gem.

HEALING CHANNEL (Su) (4d8 @ 5th LEVEL)
You can heal yourself and your allies. You can spend 1 Resolve Point to channel this energy. Healing yourself with channeled energy is a move action, healing an ally you touch is a standard action, and healing all allies within 30 feet is a full action. This energy restores 2d8 Hit Points and increases by 2d8 at 3rd level and every 3 levels thereafter.

LIFELINK (Su)
At the start of each turn, you can choose an ally within 30 feet who has taken Hit Point damage and transfer her wounds to yourself, dealing an amount of damage up to your mystic level to your Hit Points (bypassing any Stamina Points you may have) and healing the ally’s Hit Points an equal amount. This doesn’t require any action on your part. You can’t prevent or reduce the damage you take from lifelink.

CONNECTION POWER (SAVE DC: 16, SKILL CHECK DC: 21)
At 1st level, 3rd level, and every 3 levels thereafter, you gain a connection power unique to your connection. If a connection power allows a saving throw to resist its effects, the DC is equal to 10 + half your mystic level + your Wisdom modifier. If the power requires an enemy to attempt a skill check, the DC is equal to 10 + 1-1/2 × your mystic level + your Wisdom modifier.

CONNECTION SPELL
Your connection grants you additional spells known, one for each level of mystic spell you can cast, starting at 1st level and at any level when you normally gain access to a new spell level. These spells are in addition to the spells known listed on Table 4–6: Mystic Spells Known. These spells can’t be exchanged for different spells at higher levels (except in specific cases; see below). The spell level of each spell is listed in your connection’s entry.

HEALING TOUCH (SU) (25 HP MAX @ 5th level)
Once per day, you can spend 10 minutes to magically heal an ally up to 5 Hit Points per mystic level.

CHANNEL SKILL (SU) (MEDICINE, MYSTICISM)
You draw strange feelings, instincts, knowledge, and urges from your connection, augmenting your prowess in certain tasks. Each connection has two skills associated with it. You gain a +1 insight bonus to skill checks with your connection’s associated skills. This bonus increases by 1 at 5th level and every 3 levels thereafter.

MINDLINK (SP)
You can form a mental link with creatures you touch, communicating information rapidly through it. You can use mindlink at will as a spell-like ability, though only once per day on any given individual.

WEAPON SPECIALIZATION (EX)
You gain Weapon Specialization as a bonus feat for each weapon type this class grants you proficiency with.

FEATS
EXTRA RESOLVE
You have 2 additional Resolve Points in your pool.

HARM UNDEAD (SPELL DC: 16)
When you use your healing channel, you can expend a mystic spell slot of the highest level you can cast to also deal damage equal to the amount you heal to all undead foes in the area. The undead can attempt a Will save for half damage, at your usual connection power DC.

SKILL SYNERGY (PHYSICAL SCIENCE, DIPLOMACY)
Choose 2 skills. These skills become class skills for you. If one or both were already class skills, you gain a +2 insight bonus to those skill checks instead.

RACIAL TRAITS
ARMOR SAVANT
Vesk use armor in a way that complements their uniquely sturdy physiology. When wearing armor, they gain a +1 racial bonus to AC. When they’re wearing heavy armor, their armor check penalty is 1 less severe than normal.

LOW-LIGHT VISION
Vesk can see in dim light as if it were normal light.

NATURAL WEAPONS
Vesk are always considered armed. They can deal 1d3 lethal damage with unarmed strikes and the attack doesn’t count as archaic. Vesk gain a unique weapon specialization with their natural weapons at 3rd level, allowing them to add 1–1/2 × their character level to their damage rolls for their natural weapons (instead of just adding their character level, as usual).

THEME ABILITIES
THEME KNOWLEDGE (1ST)
Choose a deity or a philosophy whose alignment is within one step (on either the good-evil axis or the law-chaos axis) of your own. Reduce the DC of Culture and Mysticism checks to recall knowledge about religious traditions, religious symbols, and famous religious leaders by 5. Mysticism becomes a class skill for you, though if it’s a class skill from the class you take at 1st level, you instead gain a +1 bonus to Mysticism checks. In addition, you gain an ability adjustment of +1 to Wisdom at character creation. 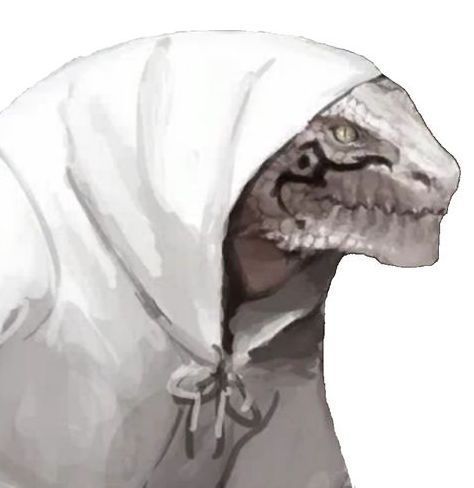