Leader of the Acquistives faction of the Starfinder Society.

Radaszam, A.K.A. “The Dealmaker”, is a soft-spoken vesk concerned with maintaining the Starfinder Society’s public-facing reputation, as well as the reputation and fame of those Starfinders directly serving the Acquisitives’ interests.

The crew met Radaszam at the Acquisitives public-facing office in the Nyori Pallisades, a luxurious neighborhood in Absalom Station’s transparent central dome. The faction leader requested that the new Starfinders help one of the Society’s junior members in winning a junkrace against a local celebrity called Ratrod. He claimed that doing so would show detractors that even the least of our Society was not someone to be triﬂed with. When they reported their success, Radaszam informed Guidance. 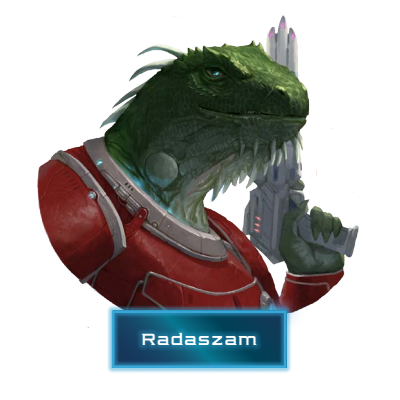